The most depressing incident of the election campaign for me was receiving a piece of Abolish the Assembly ‘literature’ through our post box.  It was a leaflet calling for the abolishment of the Senedd on the basis that it has legislated for sex education in schools.

As well as illuminating a little of the elasticity of Abolish’s ‘one issue’ campaign, it rather confirmed their approach to politics as the lowest form of toxic populism we’ve become used to. Having recently watched documentaries on the abuse scandal in football and the teacher John Owen, another thought that sprung to mind was precisely whom a lack of such education can benefit. 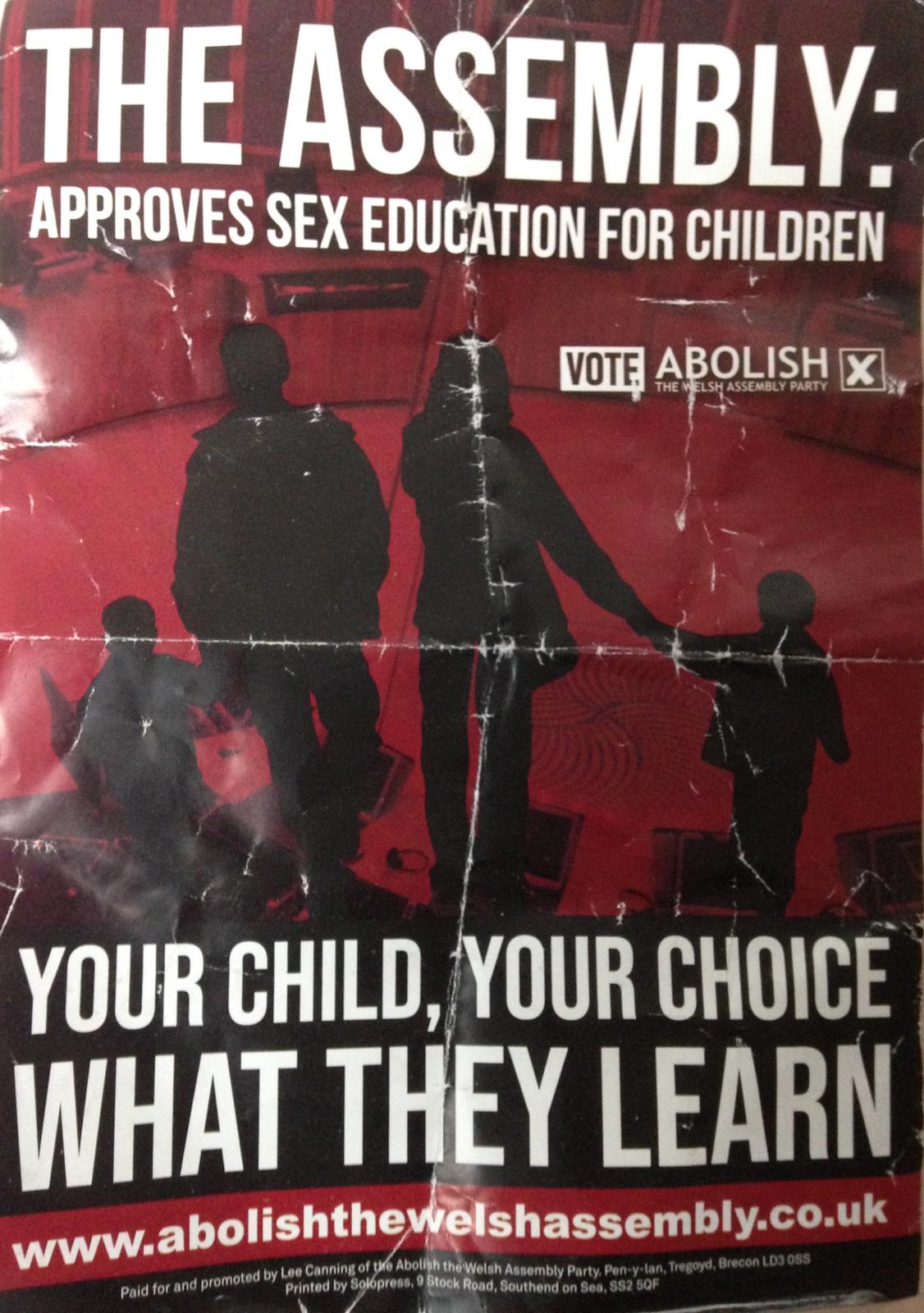 dredged the depths of the party’s private facebook group. Islamophobia, conspiracy theories, and Cymrophobia abound in a manner that rather confirms the fact that it has proved a destination for many who previously gave their vote to UKIP.

This migration is evidenced by former Kipper and MS Mark Reckless attaching himself in a leech-like manner to the body most likely to sustain a parasitic existence in the Senedd.

Whilst we might easily understand how such a party could attract a character like Richard Taylor, it all somewhat belies the appearance of the two candidates most likely to get elected, and who might have walked straight out of a Mary Poppins remake: their leader Richard Suchorzewski, your identikit “business man”, and the somewhat matronly Claire Mills. Indeed any time spent listening to them clarifies their differences with other parts of the regressive right, their common-or-garden character, and also the nature of their threat.

In particular, they focus on the idea of the Senedd as a waste of money and an unnecessary level of democracy, in and for itself. These are actually pragmatic sounding messages that, despite their false premises (why is the Senedd itself anymore unnecessary, or a waste of money than Westminster or your local authority…?), will have an intuitive attraction for some, and may come across as eminently reasonable – whilst superficially separate from arguments of the regressive right.

Except, of course, that to suggest a Senedd for Wales is an unnecessary level of bureaucracy is itself a bigoted and prejudicial perspective because it implies the Welsh people are not a nation, with distinctive forms of life: the typical basis for claims of self-government. What would the British response have been in the context of the EU referendum debate, had the Germans suggested Westminster is simply an unnecessary bureaucracy?

This prejudice is most often expressed by an example Suchorzewski likes to provide with respect to the Senedd’s profligacy: namely the annoyance and waste of space that apparently is Cymraeg. The language, which was a fundamental basis for the formation of the people to whom he proclaims he belongs, is for him an imposition – not something that he should even have to see.

There will always be a constituency that can be appealed to on this basis, and moreover the political climate of the past decade has legitimized it and strengthened it in a way that makes it easy for Abolish to tap into. Anti-Welshness is one expression of the toxic British nationalism that has taken root, and judging by the Tories’ polling, is here to stay.

A Response from the Left

Given all this, and of course a BBC and mainstream British media more than happy to embrace Abolish’s politics, there needs to be a serious response. In some ways, the seeming lack of coordination of Labour, Plaid Cymru and the Greens – all of whom are set to lose out if Abolish gain traction – actually provides grist for their mill; our politicians don’t seem up to it.

In particular, the failure to bring together a mutually beneficial campaign (that could easily have been run unofficially) to freeze out Abolish on the second vote is a cause of despair. Labour, as the main player, must shoulder the lion’s share of the blame, but Plaid Cymru’s insistence on taking an oppositional approach at every turn – that is ultimately harmful to their chances – should not be divested of blame.

One hopes that a raft of Labour voters in particular are sensible enough to follow the advice, hedge their bets, and vote for Plaid with their second vote, or the Greens in mid-Wales. It is the happy coincidence that the regressive right vote will be split somewhat between Abolish, Reform and UKIP – rather than any intelligent politicking on behalf of the left – that will keep their numbers down.

And let us not be naïve; those who will get in will be a stalking horse for the ‘abolish’ wing of the Tory party, constituted by the majority of their voters. It will follow the same pattern as UKIP and the EU of course, and if there’s any inkling that this line of policy might lead to greater success over time the Tories will gladly embrace it. As the surge in support for independence has shown, the 19% who want to abolish the assembly is not a low base from which to begin.

One interesting aspect of that figure is how it disaggregates according to social class and gender, with only 1 in 6 women and 1 in 6 of the less prosperous social classes C2DEs supporting ‘abolition’, compared to nearly 1 in 4 men and 1 in 4 of the more prosperous ABC1s. This suggests the Senedd’s appeal is more intuitive amongst those who are traditionally more towards the left of the political spectrum, and should give encouragement to the parties of the working classes.

But herein lies an issue for the Senedd, for it is unclear that any such party now exists there. Labour have failed to fly the flag for the institution, not least because it has done little to address the information deficit facing the electorate in terms of Sendd politics, but more broadly because of their administration of austerity and neoliberalism at national and local constituency level.

Plaid Cymru, of course, could still be the party of the people, the vehicle for a national movement that serves the working classes and ensures the existence of the Senedd in perpetuity, and one which replaces the janus-faced soft nationalism of Labour for a genuinely outward-looking, progressive Welsh identity.

This, however, requires a new form of politics, one that is there in our best traditions, but is yet to fully emerge. This, of course, is what those who reject party politics must now build.